Dental Check-Up: How Your Dental Care Compares with the Rest of America 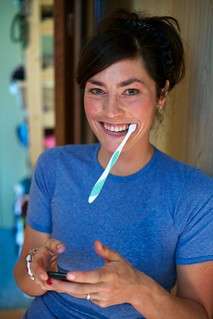 Ever wonder how your dental habits compare with the rest of the country? Statistics from 2010 let us know how we are doing:

Women Take Better Care of Their Teeth than Men

50 Percent of People Brush Their Teeth Twice a Day

If you brush your teeth before or after breakfast and right before bed, you are in the better half of the population as far as dental health goes. Over 56 percent of woman said they brush their teeth twice a day, and men weren’t that far behind at 49 percent. Only fifty percent of Americans floss as well. That might also explain why roughly half of Americans also have gingivitis and how close to another third have untreated dental decay.

Over 70 percent of People Brush Their Teeth Before Bed

While only half of America brushes their teeth every day, almost three-quarters brush their teeth right before bed, according to another survey. Perhaps this means that evening is the easiest time to create a dental health routine. It is also one of the most important times to brush your teeth so that a bacterium doesn’t sit and replicate all night long on and around your teeth and gums.

Wondering how you can get into a better habit of regular brushing and flossing? We’ve got an article to help you out coming up next week!