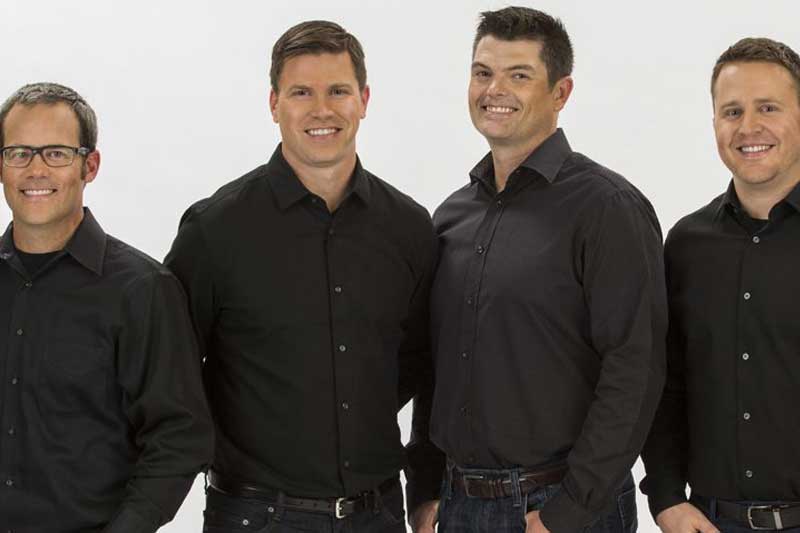 Read below to learn a little bit about each one, to really get to know them you’ll just have to come visit us at our brand new offices in person…Or take a stroll over to our blog section while you are here!

In 1981, at the age of 8, Carson became a patient of Dr. Pierce. Skip played a big part in Carson’s early interest in the field of dentistry. As a high school student, Skip invited Carson to observe the practice, and Carson quickly knew what his path would be.

In 1991, Carson graduated from Boise High School, then went to Pepperdine University where he received his Bachelor of Science degree. In 2001, Carson earned his Doctorate of Dental Science from Creighton University, and was privileged to return to Boise to practice with his longtime friend and mentor, Dr. Pierce. Carson practiced for 5 years as an associate for Skip and became a partner in Summit Dental Group in 2006.

Dr. Mooney is a former President of the Southwest Idaho Dental Society and a current member of the American Dental Association and the Idaho State Dental Association. Married to his wife Cori for 10 years, they have a 3 year old daughter, Maci and two Weimeraner dogs. As an Idaho native, Carson enjoys much of the recreation this community offers. He has been competitive in both golf and skiing, and also enjoys mountain biking, road cycling, and hiking the foothills with his wife, daughter and dogs.

Dr. Studebaker is an Idaho native who graduated from Twin Falls High School. He then went on to the College of Idaho and graduated with honors. During his college summers, Rob worked as a river guide and has rafted and kayaked throughout the U.S., Central America and Greenland.

Dr. Studebaker remains active in the community. He has served on local boards, was president of the Southwest Idaho Dental Society, and is a member of the ISDA, and ADA. He joined Summit Dental in 2006 and greatly enjoys being a partner in the practice.

Rob is married to his lovely wife Barb (Brazier), a Boise native, and they have two sons, Alex (17) and Will (13). His family loves to snowboard and ski, be on the river, wake surf, and travel. They also spend a lot of time hiking with their two Weimaraners named Addie and Roxy.

Dr. Ritchie was born and raised in Boise, ID. Lance went on to graduate with a Bachelor of Science degree from Linfield College in 2002, and a Doctorate of Dental Science from Creighton University in 2007. He also completed an Advanced Education in General Dentistry at Idaho State University, where he received additional training in the placement of dental implants, cosmetic dentistry, and complex case management.

Lance has enjoyed a return to the Boise area to live, practice dentistry, and enjoy the abundance of outdoor recreation here in Idaho. Lance and his wife Jennifer have also enjoyed raising their three young children in the Boise area, and appreciate the community we are fortunate enough to be a part of. Outside of the office, Dr. Ritchie enjoys spending time with family and friends, mountain biking, skiing and travel.

Dr. Richardson has been a dental partner with Summit Dental for 7 years and has been a patient of Summit Dental Group since he was in grade school. Skip Pierce, the original founder of Summit Dental, was a big influence in Zach’s life and his decision to choose dentistry as a career. Zach was born and raised in Boise and graduated from Capital High School in 2004. He went on to earn a Bachelor of Science at Carroll College in Helena, MT while competing on the collegiate football team. Zach then went on to graduate at the top of his class with a Doctorate of Dental Surgery from the University of Minnesota School of Dentistry. Currently, he is an active member in the American Dental Association and Idaho State Dental Association, and enjoys staying up-to-date in all the latest trends and dentistry techniques by attending various continuing dental education courses each year.

Zach has been married for twelve years to his high school sweetheart, Hannah, and together they have four children ages 1-8 years old. Zach enjoys everything the Idaho outdoors has to offer, spending most of his free time golfing, camping, mountain biking, boating, and skiing. A fun fact about Zach, he says has never been beaten in a karaoke contest.

“I look forward to getting to know each and every one of my patients. I truly believe the best part of dentistry is getting to walk through each stage of life with all the families and patients I see.”

Dr. Kevin Yarbrough was born and raised in a suburb right outside of Chicago, IL.  Kevin attended Southern Illinois University where he received a Bachelor’s of Science Degree.  He then attended Barry University in Miami, FL where he received his Master’s of Biomedical Science and finally, he received his Doctorate of Dental Medicine Degree from his alma mater, Southern Illinois University.  After completing dental school, Kevin participated in the Advanced Education in General Dentistry residency program at Idaho State University and St. Alphonsus Regional Medical Center in Boise, ID.  Throughout his residency, he received additional training in dental implants and treatment planning complex cases, while providing high quality dental care.

At the very young age of 6, Kevin started vocalizing his dreams of becoming a dentist.  Some kids dream of becoming astronauts, or playing a professional sport, but Kevin’s dream has always been becoming a dentist.  His childhood dentist had a significant impact on his life and his goals as a child.  When Kevin is out of the office, he enjoys: golfing, snowboarding, hiking and the many other outdoor activities boise has to offer.  Kevin and his wife, Lidia, just recently celebrated their one year anniversary and love everything Boise has to offer! Kevin is a two-time marathon finisher and is a huge Chicago White Sox and Bears fan.   One fun fact about Kevin is he’s an ordained minister and loved the chance of being able to officiate his cousins wedding.  Dr. Yarbrough is currently a member of the Idaho State Dental Association, American Dental Association, and participates in the High Desert Sage Study Club.